Step Out Of The Ordinary With The Babushka Slot Game 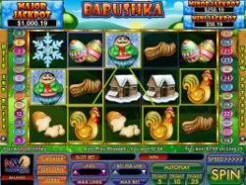 Play Now
A babushka is a scarf that is worn over the head and tied under the chin in many parts of Poland, Russian, Czechoslovakia, and the Ukraine. It has also come to be an affectionate term for an older woman, a type of doll as well as a grandmother in many European countries. The Babushka slot game brings together some fun symbols that are associated with iconic cultural images, particularly in Russia, Poland and the Ukraine. Entertaining, unique and very definitely different than the typical slot these, this is a fun slot to play for anyone.

The Game and Wagering

This NuWorks game is very easy to play and a standard 5 reel 25 payline slot. You will choose a coin size from one penny to one dollar per line and then choose the number of lines from one to twenty-five. Playing is as simple as hitting the spin button on the bottom of the reels, or setting the autoplay and just sitting back and relaxing.

Instead of the traditional background on the reels, with the Babushka slot game the background of the reels is a series of green, grassy valleys and hills that extends to also form the background for the game. The symbols on the reels include snowflakes, homemade bread, yarn and knitting needles, Easter eggs, sheep, cows, colorful clogs and even a snowy cabin. There are two special symbols including Mr. and Mrs. Babushka, two very authentic looking Russian dolls. Mr. Babushka is the wild symbol, and it will replace another symbol except the scatter which is Mrs. Babushka. Mrs. Babushka will increase your winnings if you are lucky enough to see five, as will her husband as well. The interesting little extra features with the Babushka slot game is that if you see either of the Babushkas on the reels they can open up, like the Russian stacking dolls, to reveal two more Mr. Babushkas that will go to the two other spots on the reel. This can really add to the winning possibilities with either of these symbols.

While the Babushka slot game doesn't have a second screen game, it does have the mini, minor and major jackpot that can also be won at the end of any spin. As a progressive jackpot playing maximum bet provides the biggest winning possibilities, and this game is certainly one you will want to play at that level.
Play Now